HOW PRINCESS MET HER MOM 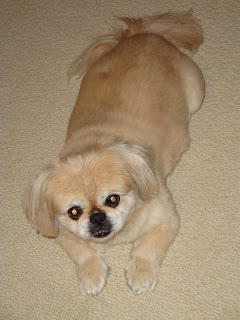 I asked how some of you met your dogs. Ann sent me her story. She met Princess about seven years ago. She had waited over a year after her precious Shih Tzu Nino passed away. Sometimes, our heart isn't ready for another. But, what we realize, is that the heart is big enough to love again, to love more than one. It's a tribute to the love we had for the dog we no longer have. 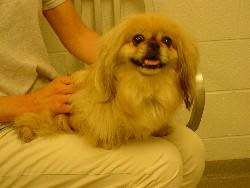 Ann's father had had Pekingese in Vietnam and Ann decided to look for a Pekingese to join her family. Shih Tzus and Pekingese are "cousins." Ann was looking for one that could "go for long walks and liked to fetch til the cows came home." After looking for awhile, she hadn't found anything and just decided to wait. 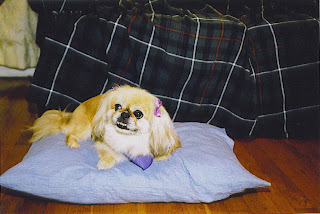 One Saturday aftenoon, she decided to stop at the local animal shelter. Chances of a Pekingese being there were slim, she though, but she went anyway. It was a busy day at the shelter, but Ann managed to work her way around all the people. Then, she saw her-- a little blond Pekingese. She called the Peke to her, but she was nervous, and trying to give little tail wags. She called her parents, and they were able to visit with the Peke in a room. There had been other applications for her, but they all fell through. With fingers crossed, Ann waited to see if they would be approved and two weeks later, they found out that Princess would be there forever. It was Ann's 21st birthday-- what a gift and special day that was. HOW DID YOU MEET YOUR PEKINGESE?
Posted by Linda at 5:00 AM

I have always had two dogs and my last two died a week apart from eachother. It was a shocking time for us - really unbelievable.
We got puppy Kenzo first but I wanted a peke again so we tried to find one (hard to get Peke's here), Kenzo was about 8 months when we got Moi from a breeder who did not want to breed from her anymore. Moi was 5 years old and we still have "top dog" issue's between them! LOL

Love that story: ) Princess is beautiful and quite cute with those bows!
I found Newmie through an ad in the paper...I knew nothing about Pekes but he stole my heart. He became my constant companion while Adam was in Iraq.
When we moved to Germany,I found an ad in Stars and Stripes for Peke puppies. Turned out they also had a 5 month old puppy and we scooped Miss Drizzle up and the rest is history: )

So sorry for Kiki's passing. I know she is in heaven, playing with all the other dogs, free from pain.

Two of my pekes are in heaven. The first was my dog growing up. Momma said I could not have the neighbor's dog. (They were moving and needed to place the stray they had found.) Tasha was allowed to "spend the night," however. It worked!

My next peke was 10 years later. Gracie was from a show-dog home, and her mom decided not to show her. I had spent the day in their home, getting to play with the 10 dogs and her 2 other littermates... it was Peke heaven! Gracie was my heart, and passed too young at nearly 8.

Camden was a PVPC rescue, who'd been turned in by his owners to the pound as he had fleas. It was WAY too soon after Gracie passed for me to think about adopting, but something said we just needed to meet this dog. I found out later that the "something" was Jeanne, praying that Camden would come to live in our home. Be careful when asking Jeanne to pray for you... she is powerful! :-)

Brandy is our sweet foster dog, who was one of the Bristol 18. She makes me laugh EVERY single day.

I actually did not really like Pekingese since as a little one my grandmother had 2 that did not like children.I answered an ad on craigslist for a "small dog"that needed a home.As soon as I saw her I fell in love and after I gave her a treat she seemed to feel the same way.We have been inseparable ever since.I thank god every day for sending her to me.