Grace (formerly Glitter) had company. Her mom's friend was moving and her three Dachshunds and two cats came to visit. 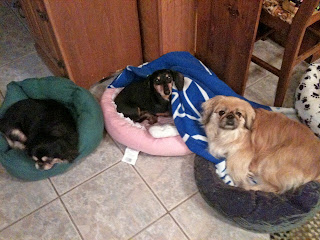 They have come before and Ted loved them. They are new to Grace though. But, she likes them. 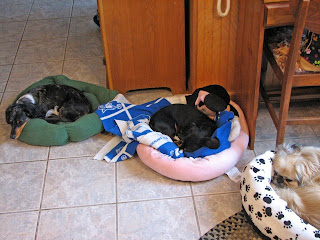 Nobody wanted to miss anything going on in the kitchen, so they had all their beds a short distance away. You can see Little Mike and Pearl and Ted... 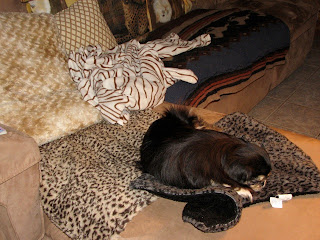 But, Salty wouldn't cooperate. She's under the blanket. She loves to burrow under blankets to keep warm. Grace and Ted didn't understand this-- how can they breathe under a blanket? 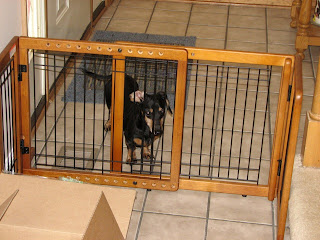 Here's Pearl. The baby gates went up because they become ultra curious and want to go into places they shouldn't. Sounds like all of mine! 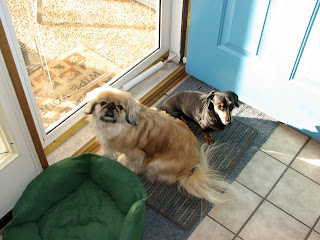 Ted sits with Pearl, who is wondering when her mom is coming to get her. 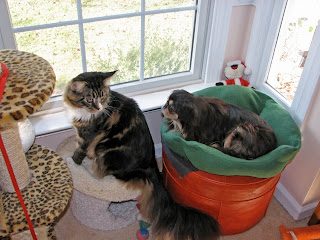 Grace is here with Junior, one of the "cat brothers" of the doxies. They are in the front window, the primo spot for watching out the window & guarding the house. Junior's name is ironic, given that he is bigger than Grace. He's only a year old and already weighs 16 lbs. (Grace only weighs 12.8 lbs.) He is a Maine Coon cat (yes, a show cat) and is at ease with the dogs....who are sometimes intimidated by his size! Grace, I like how you have your bed up on the ottoman. 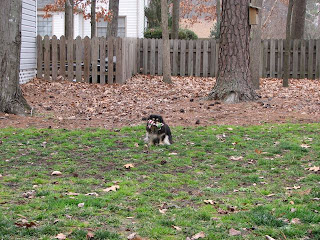 Grace sometimes retreats outside to have "quiet time." 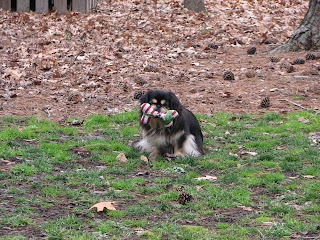 I see she has a Christmas toy that she loves. 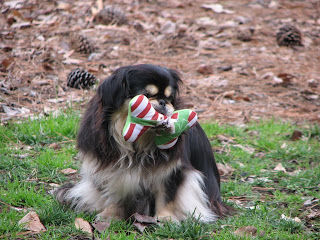 Sometimes Ted will steal but he knows it's Grace's so he doesn't keep it long. Let me know when all your company needs Grace. :-)
Posted by Linda at 1:00 AM

Now it is a very good thing that those Dashy's did not stay at our home for Missy Moi has two of these guys that she sometimes meets on her nightly walk and she does not approve of them at all !! LOL

Unlike Moi Moi - I love a sausage dog :)