I want to extend my sympathy to Bailea and Buttons' mom-- both these precious Peke girls died within a week of each other. Angela had four Pekes, and she fostered Buttons for us. Bailea was one of her three Pekes when Buttons joined them. Bailea was her Princess. Her vet even came to the house so Bailea could be at home-- there was nothing left that could be done for her except to gently let her go. Here was Bailea dressed up for Halloween several years ago. 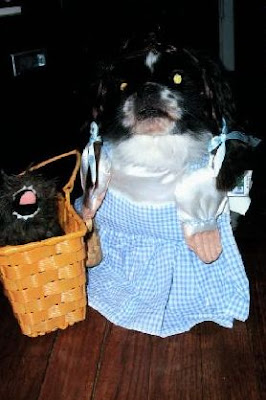 Buttons was fostered by her two years ago. When an application came for her, Angela decided, "no way" could she let Buttons go. Buttons had the best two years of her life with Angela and her Pekes. Last week, Buttons stopped eating and drinking. Her breathing became labored. It was obvious that she was struggling. Buttons has been in her "alzheimers world" for a long time now, but she would always recognize the smell of hr mom's hand when she would go to pick her up out of the yard. Angela picked out a box that was light blue with white clouds for Buttons' ashes. She said it remided her of Buttons because when she would walk in circles in the yard in her little confused alzheimers world but then would stop every so often and look up in the sky and just stare....

When Buttons came into rescue, she was in a shelter and it was a day that was going to be over 100 degrees. I pleaded with the shelter to let me have her (even though it wasn't "time" for her to be released, and they did. She would have never survived that heat.

This was her Christmas picture that year-- a happy, loved Peke who was finally living the life she should have lived all along.
Rest in peace sweet Bailea and Buttons.
THE LEGEND OF THE RAINBOW BRIDGE
Just this side of heaven is a place called Rainbow Bridge. When an animal dies that has been especially close to someone here, that pet goes to Rainbow Bridge. There are meadows and hills for all of our special friends so they can run and play together. There is plenty of food, water and sunshine, and our friends are warm and comfortable.
All the animals who had been ill and old are restored to health and vigor; those who were hurt or maimed are made whole and strong again, just as we remember them in our dreams of days and times gone by. The animals are happy and content, except for one small thing; they each miss someone very special to them, who had to be left behind.
They all run and play together, but the day comes when one suddenly stops and looks into the distance. His bright eyes are intent; His eager body quivers. Suddenly he begins to run from the group, flying over the green grass, his legs carrying him faster and faster. You have been spotted, and when you and your special friend finally meet, you cling together in joyous reunion, never to be parted again. The happy kisses rain upon your face; your hands again caress the beloved head, and you look once more into the trusting eyes of your pet, so long gone from your life but never absent from your heart.
Then you cross Rainbow Bridge together.... Author unknown...
Posted by Linda at 6:00 AM

I feel so sad. I lost my two dogs - rosie my resuce pug aged 10 and then Oscar a pug x maltese aged 14 a week apart too. It is just shocking - you wonder "what next?" .
Please send my love and thoughts to Bailea and Buttons Mum and family .
It is just so hard.

I'm very sad about Buttons. I thought it was great when she was adopted at her age. So glad she received wonderful care for her final years.

I can't stop crying.....what a sweet and yet very sad story. Thank you for caring and loving Bailea and Buttons. You have earned your wings. They were very lucky pekes to have claimed you......

Thanks to Linda and everyone at the Peke Club and everyone that supports rescue doggies! These babies are my life. I miss them terribly. I have two boys (Basel and Frankie) that I live for also, and I know they wonder where there sisters are. They are really sticking close by each other now because they are probably wondering "gee... is mama gonna get rid of us next??" (lol) In any event, they are so confused, I am sure, they never have really stuck together that much...THANK YOU ALL - Bailea and Button's mom