Marley Bear and His Friends

UPDATE: Marley Bear is doing wonderful and fits in perfect with all of them. He has learned to growl and bark, it is funny to hear. He sounds like a little lion cub instead of a dog. Marley and Dexter are best buddies, they play and play until they can no longer play. They even sleep together and eat from the same food bowl. Marley thinks it is fun to share with Dexter.

Marley Bear has joined Tina and her husband's family. He was in a pet store-- and Tina went in with a friend-- not to buy a dog! She wrote me about him, agonizing over him being there in a cage, not having anyone interested in him. She didn't NEED another dog. She has three! She had Jelly Belly and then adopted Pekes Dexter and Cooper from us. 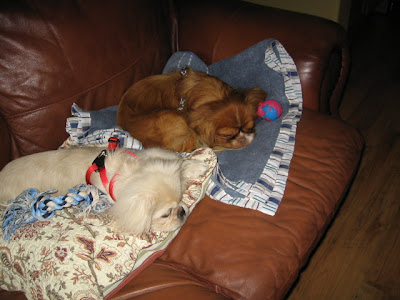 No, she didn't need another one-- but sometimes, things happen for a reason. Marley Bear was supposed to join this family. Here he is with Dexter-- who is his friend now. 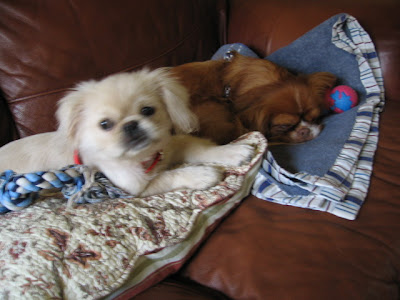 We hope Dexter won't teach Marley Bear to steal food, though. His mom had made herself a turkey sandwhich for dinner and was eating it in front of the tv. She heard Jelly Belly and Cooper barking-- so she sat the plate down on the coffee table to go and see what they were barking at. She knew she shouldn't have put the plate on the coffee table. We all do things that we shouldn't. In our minds, we're going, "I shouldn't do this"-- but we do it anyway. Pekes know no boundaries and Tina's Dexter is no exception. He jumped on the coffee table and when Tina came back, the sandwhich was gone. We all know where it went! There was Dexter sitting on the couch with the sandwhich hanging out of his mouth. It was too big for him to gulp down so he wasn't quite sure what to do. Tina tried to be very serious, and tried to scold him. She had to pry the sandwich out of his mouth. Dexter growled his cute little growl, but it didn't scare Tina a bit! It's really hard to not just laugh when the dogs do things like this. It's hard to be alpha mom when we're trying not to laugh!! Dexter, being a true Peke, pouted the remainder of the night until bed time. He really wanted that sandwich!! 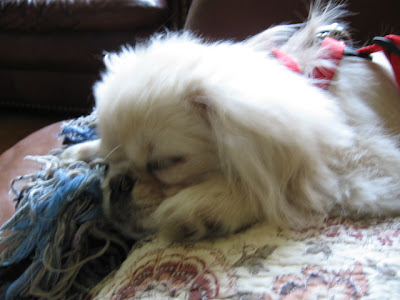 Marley Bear didn't care about the sandwich. He isn't big enough to jump on the coffee table. He was more interested in taking a nap. 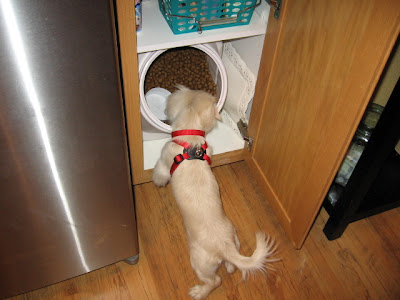 Or going to check out his own food stash. (He is trying to climb into it while his mom feeds them. Why use a food bowl, if you can just help yourself! 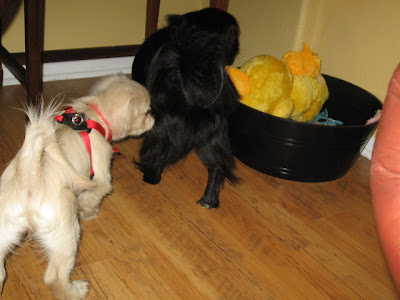 Or checking out the toy bucket with Cooper. 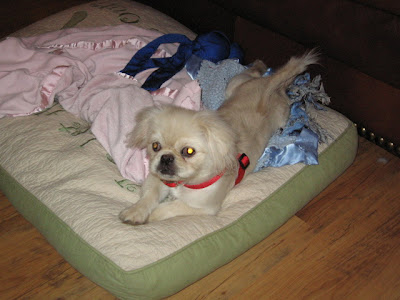 He is just so glad to have a home-- and a great home! He is so happy to have doggy friends, and be loved and hang out on his dog bed. He is alert and very smart like Cooper, who loves him dearly already. Marley Bear already knows his name. I think their dog family is complete now. What a great family it is!
Posted by Linda at 6:00 AM

Tina and her husband are the "best" pet parents. They have a huge heart for these little pekes. Tina knew there was room at the Inn for one more. Thank you for taking him into your home with Jelly Bean,Cooper and Dexter. Oh and yes.......your husband too. :)

Great ending to a not so good beginning to Marley Bear's future.

What a lovely packet of pekes!!

Was there some cranberry sauce in that turkey sandwich???
Kenzo wants to know incase he visits . :)