Pekingese can have eye problems. People have asked me why-- it's because they are flat faced, so their eyes are closer to danger. Their eyes also "protrude" more than most dogs and have large folds which sometimes rub the eyeball. This can lead to damage, scarring, lacerations. There are many things that we can do to help them. 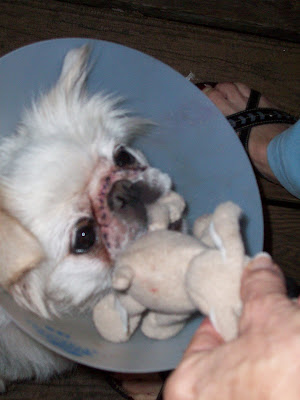 This is Taloola. She was adopted from us-- she had large eye folds that were giving her problems. So, she had the eye/nasal folds reduced. It looks so bad! But, believe me, it looks worse than it is. 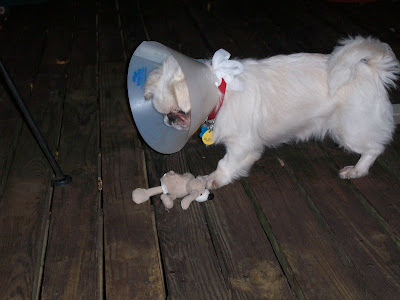 In a day or so, she was trying to play. That toy kept getting caught under her e-collar and disappeared! But, she still tried. 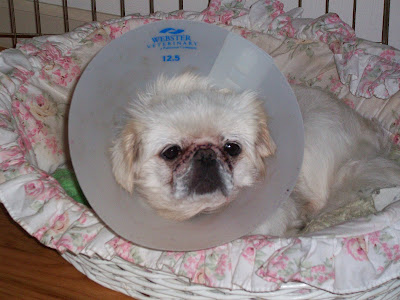 She tried to look really pitiful, but I knew she was okay. I'm amazed at how fast these dogs recover from surgery! 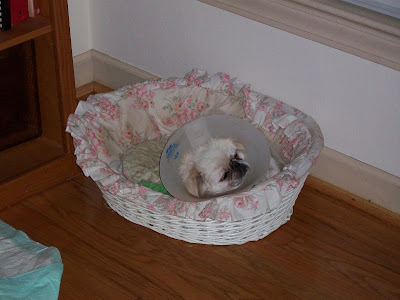 And she could just curl up and rest in her little bed whenever she was ready. 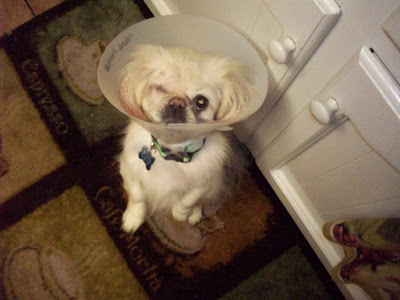 Little Missy, one of my foster dogs now, had surgery last Thursday. She had to have a bad eye removed and the fold reduced under the other one. She also had some other tests done while she was sedated. She was pretty miserable that night, but I had pain meds for her and she slept a lot in a special area where the others couldn't bother her. After two days, though, she wanted out! She wanted to be with the rest, eat her meals and go outside. Now, four days later, she just wants the e-collar off-- but it had to stay on until next week so she won't rub her stitches. She is eating well and gaining weight-- she was just nine pounds when we got her. She also came with kennel cough, but is fine now. 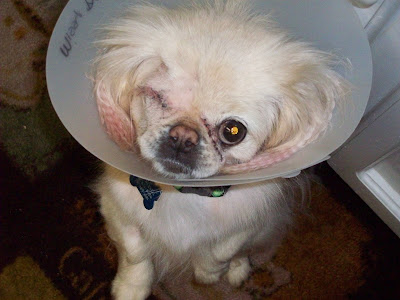 She will be so pretty once her stitches are out and her facial hair grows back. She just wants to be on the couch with me and have back rubs. She's a great little girl! She'll be available for adoption soon. (The pink on her ears was there when she came into rescue-- she must have been to a groomer who did "highlights." It will wear off in another month or so.)
Linda haveninhim@aol.com www.potomacpekes.org
Posted by Linda at 6:00 AM

Little Missy is so sweet - I do hope she finds a lovely home - I don't know about you all out there but.... I am not fond of dying dogs hair fancy colours.
I like "natural" LOL

Toby had dry eyes and we would ut the cyclosporine in his eyes 2-3 times a day. Otherwise he might have lost his eye too. These guys are def sensitive in the eye dept!

thank you for taking such good care of them!