GINNY LEE, GETTING READY FOR HALLOWEEN 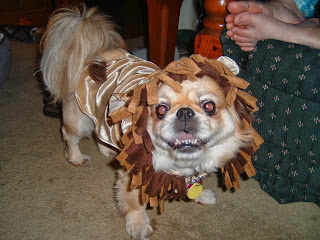 I received an email from Ginny Lee's mom-- so I'll just share that with you.   It's much better than what I could write.  Ginny Lee was adopted from us and is SO loved!! 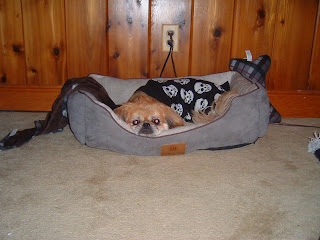 "Ginny Lee's doing great.   We've spoiled her rotten and I think she's done the same to us.   She's keeps getting more and more personality and kind of a clownish sense of humor.    Ginny loves her home and family so much and will tell mail people and UPS people that they are totally trespassing on Ginny territory so "Beware".    She's completely different for invited guests though and expects (and deserves) lots of love. 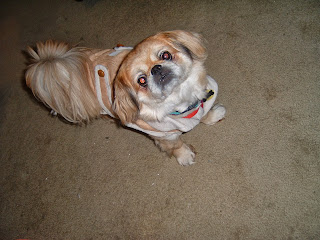 She's completely different for invited guests though and expects (and deserves) lots of love.     She's recently taken to "borrowing"  the couch blanket, dragging it off the couch and putting it in one of her dog beds.   She can cover up in it too.   The first time she did it,  I saw her dragging it along.   I had to watch because she was so cute and was having such a good time.   She finally got it in her bed and snuggled up.  Later my husband saw and thought I'd given it to her.   When I told him she had done it, he said "yea right."   A couple days later, he saw her dragging and snuggling the blanket around her. 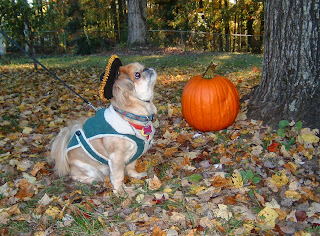 I guess we now only get to use it occasionally  'cause it looks like Ginny's claimed it.    Sometimes she plays with her dog bowl by trying to push it along the floor with her nose.   She's funny because it looks like she thinks she has a long snout instead of a little short one.   She roots and roots and pushes and pushes and mostly totally misses the dog bowl  altogether.   On the off chance she touches it,  she looks so surprised and pleased with herself.  I think in her mind she thinks she IS a big dog, because she still has lots of bad words for all other dogs (cats, deer and most recently horses - which are obviously just really big dogs.)    She may have decided she's a people too - we're still researching this.     When we come back from outings, she so happy to see us.   She has the cutest "whole body" tail wag and wiggle and usually puts her front paws on your leg to get a head pat and ear scratch.   She has a lot of puppy play in her which is super fun for the kids.   Stuffed toys and chasing ball are her favorite games.    She didn't mind the cute outfits or hat.   Hope you like the pics.   My favorite is Ginny2 where she is her alias Poocho Grande, but Lion Ginny is adorable too."     I think Ginny Lee is adorable, too!!
Posted by Linda at 1:00 AM

Oh how wonderful to read and see the photos!
The "girls" and I like that Mexican outfit too!!!!