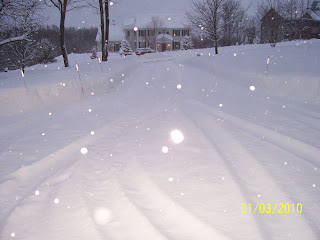 So many places have had a record amount of snow-- and it's early! Most of the snow comes in January and February. 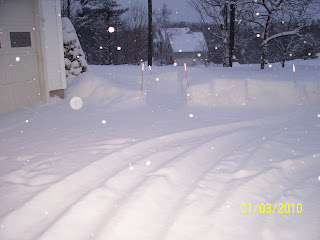 My sister sent these-- she lives in Vermont. I love to LOOK at the snow, from inside, in front of a fireplace, sipping hot coffee (I'd rather have hot chocolate, but I'm one of those people who can't have milk products, bummer!!). So, I have hot coffee, black, no cream or half and half. Okay, I like black coffee, I'm just trying to make you feel sorry for me-- is it working?? :-) 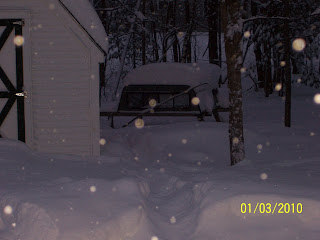 This is their shed, and you can see a little path in the snow. My brother in law had to make snow paths for their dog. 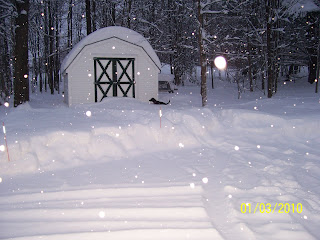 And there is Sophie. Can you see her? She is not a small dog. She's be UNDER the snow if it wasn't for the paths made for her. 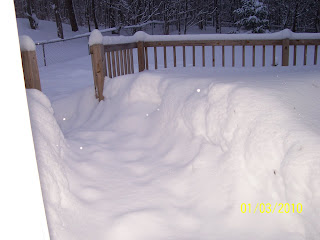 Here's their back deck. Yep, that's a lot of snow. 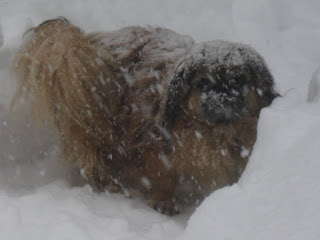 This is Shadow-- one of my former foster dogs. He had a lot of snow in Maryland. And he is covered! 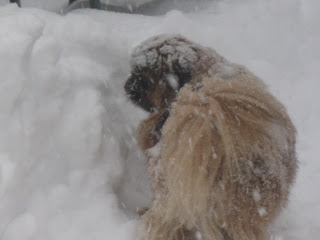 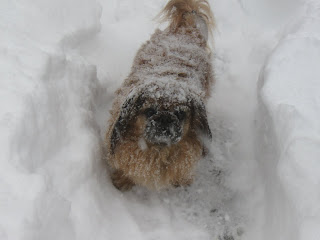 I see you are covered-- did you roll in it?? 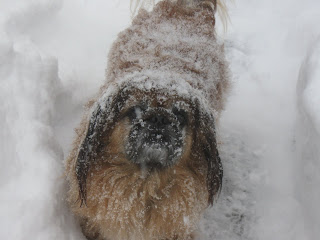 Oh, good, you're closer-- I see how pathetic you look. But, I also know you get to go inside and get all warmed up-- and you are also POSING for these pictures. What does that tell us. :-) 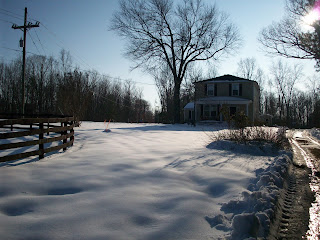 This is where I've been for several weeks. At my daughter's farm in Virginia. I've been helping her with the new baby-- my first grandson. My dogs are at home with my husband (I brought them awhile, but they were actually glad to just go home, to the familiar area they know). Don't worry about them. A friend comes everyday at lunch to let them out and play with them. They aren't suffering. 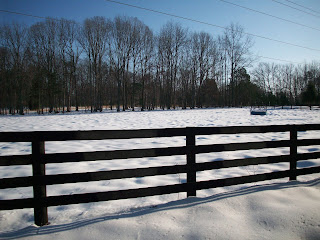 Here is part of the horse field. No horses there right now-- they're in another field. There's too much snow here, so they are in a smaller field, having other things to eat. They can't find any grass right now. They have a water heater in their water container (I have no idea what it is called-- I'm not a horse person.). 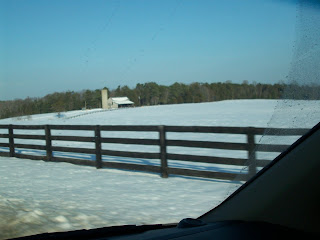 And this is driving along. I thought these pastoral scenes were so beautiful. 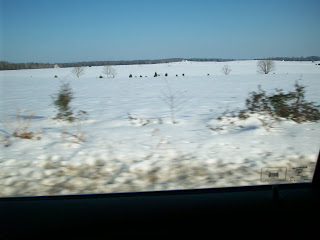 And this one.
Now this is Tigger. He lives in Indiana. There's snow there, too! Snow is everywhere. Okay, Fran, I know it's not in California. And Melinda, it's not in Australia-- but it's all over the east coast.

And here is Leila-- looks like a moustache!
Bear looks like he nose-dived into the snow. His girl friend, Precious, wouldn't have anything to do with the snow! She went out with her dad and dog siblings and her owner turned around and she was already in the house looking out at him! Smart girl!!
This is Tigger, Bear, Precious, and Leila's house at night-- snow covering the cars.......
The grill is covered. And last, but NOT least, is Jill Lee-- aka Jill Boop-- in Richmond. Yep, there was snow there, too. It didn't stop her and her friends from running around though!
I think we have had enough snow-- but I also think, we're not done yet!
Posted by Linda at 6:00 AM

Really! I think enough is enough! Yoshi and Shami have to put their binkies(little horse coats)on to keep warm when they venture out on to the tundra! Yoshi hates the cold but Shami loves to play in the snow! He chases little snowballs that he makes while running in it. It's hilarious!

I love the frozen peke faces but I can imagine the pools of water when they come inside and the snow melts off them!

Linda - on Monday we are going to have temps of 105f! That should melt that snow!

I am so ready for winter to be over, although major blizzards and endless snowstorms can be quite exciting at times. We've just been getting the fine constant mist which is sneaky and adds up. The snow from the storm in Dec. hasn't melted yet either. Looks like everyone, especially pekes, are dealing with it.

P.S. I want one of those Kuranda beds!