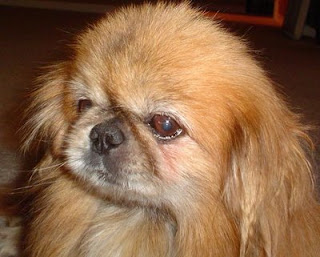 Do you remember Rusty? He was in two of my blogs in June. He had been abandoned in the garage of a house. He was eating wood to stay alive. 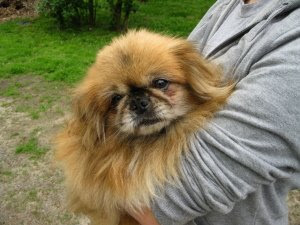 He was pretty dejected when he was saved from the shelter hours before being put down. Rusty was adopted last May/June from a shelter. 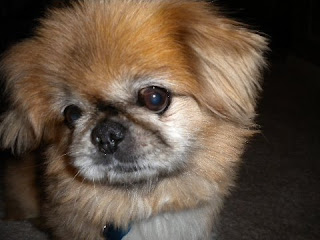 But, life has improved for him-- a LOT! 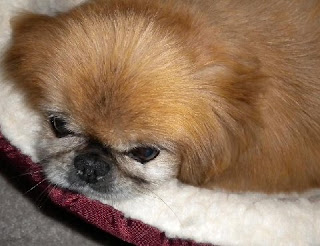 He has gained three pounds and loves his new bed. 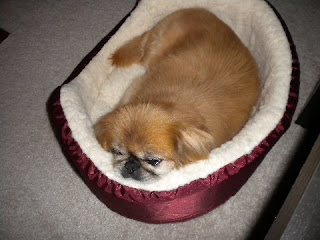 His new owners love him so much. 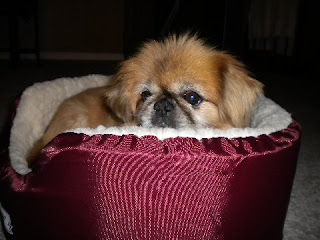 He is about 11-12 years old-- past the age that most people would adopt. But, seniors have so much to give. And they are so grateful to be given another chance. 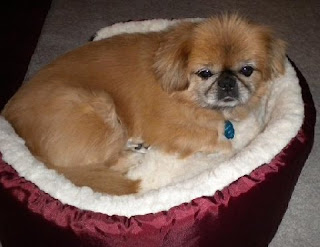 He's a beautiful happy boy now! Don't hesitate adopting one that isn't young-- the ones that are a little older will give you so much love.
UPDATE: Rusty's owner said that now he takes Rusty for 3-4 walks a day of about 45 minutes each and Rusty loves it. He said, " he will sniff everything and check out any little noise he hears. He will pee and poo in exactly the same spot every day. The neighbors love him and will come and say hi, but he hates everyone and will growl and the hair on his back will stand up. The one thing we have not managed to overcome is his growling and snapping at strangers.It's a work in progress .............." Yes, Pekes can be a work in progress! Thanks for not giving up on him!
+++++++++++++++++++++++
PLEASE don't buy any dog or cat toys made in China. They could contain TOXIC levels of lead and other harmful substances: http://wcbstv.com/local/dog.toys.lead.2.662450.html
Brands made in the USA include these Nylabone brand toys: http://www.google.com/products?hl=en&q=which+Nylabone+dog+toys+are+made+in+USA%3F&ved=0CDIQrQQwCg&show=dd&sa=N&start=0
MOST Kong toys are made in the USA (except for the Kong Wubba toys, and Air Kong toys,which are made in China): http://www.google.com/products?q=+Kong+toys+made+in+USA&hl=en&aq=f
Orbee-Tuff toys are ALL made in USA: http://www.google.com/products?hl=en&rlz=1C1GGLS_enUS361US361&q=Orbee-Tuff+dog+toys+made+in+USA&um=1&ie=UTF-8&ei=7YFMS-eYNJLV8Aap5N36DQ&sa=X&oi=product_result_group&ct=title&resnum=3&ved=0CCEQrQQwAg West Paw toys are also ALL made in the USA: http://www.westpawdesign.com/
THE FOLLOWING LINK IS TO PET TOYS MADE IN CHINA.....Please do not buy these:
http://www.google.com/products?q=pet+toys+made+in+China&hl=en&show=dd&sa=N&lnk=next&start=10
Posted by Linda at 6:00 AM

Rusty looks so much like Cindy. I sure hope Cindy finds her forever home just like Rusty. He is so cute. And I bet he is sweet too....

What a darling! Thank-you for listing the American-made pet toys. It's so frustrating trying to find items that are not made in China. I'm not just talking about pet products, but everything! I have a tough time finding clothing for my niece that's made in the USA.

awww rusty!! what a beautiful boy!! I am so glad he's getting a good life in his twilight years.

Rusty looks a great boy!
I think its a good thing to adopt an older dog because you really do know what temperment and size a dog you will have.
Pekes can live to 17yrs too!

So cute!!! He looks so cozy and happy in his bed. Just Sweet!!