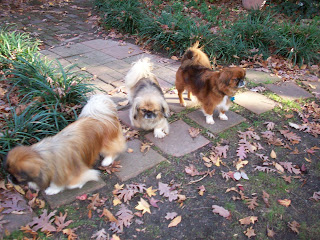 Camp Runamuck is in session-- not for the grandbits, but for the dogs! My house has been full of dogs for a week. I have my four, two fosters, and my daughter's three dogs came to visit for over ten days. For the most part, they all get along. Above, Scooterbug, Odin and Kai Kai head out down the Pekingese Pathway. 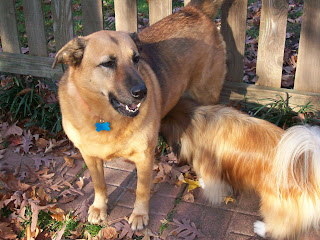 Sweetie Pi (Pi Pi) was standing on it, so Scooter walked right under her.
She's the only non-Peke here. 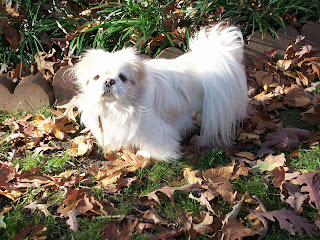 Lottie Moon is the Mama dog-- she's eleven now and everyone listens to her, even my bossy Cranberry! 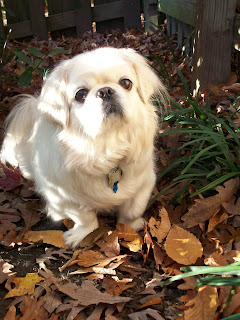 Cranberry even backed up when Sweetie Pi fussed at her when she was too close to the food. Wow, Cranberry was afraid-- never happens! 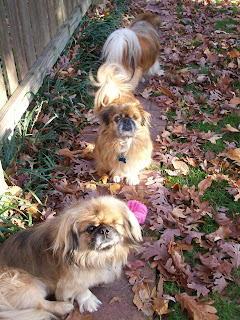 Odin, Wicket (my daughter's 12 year old Peke) and Scooter on the Pathway. 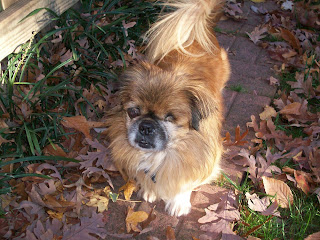 Wicket lost one of his eyes last year due to a tumor. He's one of three here missing the right eye. He's almost 13, so his hearing is going and his one eye doesn't work quite as well as it used to. But, this is one sweet boy and I love it when he comes to visit. 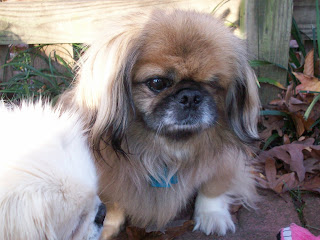 Odin loves all the company-- as long as he has his toy and his bed, he's a happy camper! You can see a bit of the toy he carried outside. 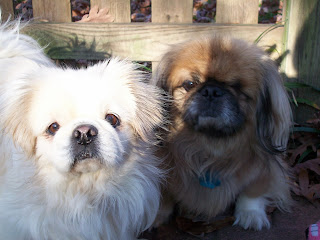 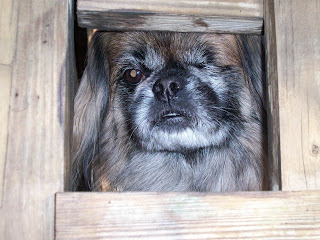 Max went up to the deck and peeked at me through the slats. He's a foster who no one adopted-- I don't know why. He's a great dog and knows how to sit up. He's been here several years now-- he's eight years old and loves to be on the ottoman looking out. He's my boy now. 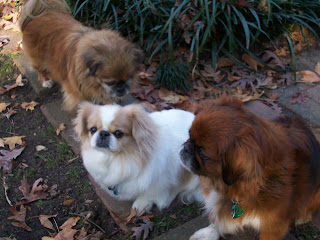 Starlight (with Wicket and Kai Kai) just puts up with it all. As long as she has her daddy on the couch at night, she is fine. I'm amazed with how well they have all done with such a crowd! Did you count them all? At Camp Runamuck for Dogs, we have NINE right now. Dinner time is busy, with different foods, eye drops, ear drops and pills. By the time we have about 5 totally chaotic minutes, it's done though. Don't you wish you were here! :-)
Posted by Linda at 1:00 AM

My folks had 10 dogs - 9 Peke or Peke-Mixes and 1 Aussie/Collie. I'd bring my 2 up and there'd be 12! It was always interesting, but they got along. They're down to 5 now so it's less hectic, but still interesting.