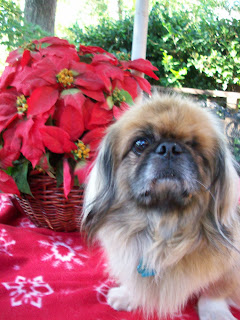 Odin is my foster dog. He came from a Roanoke shelter. He's so sweet, I don't know why no one claimed him. 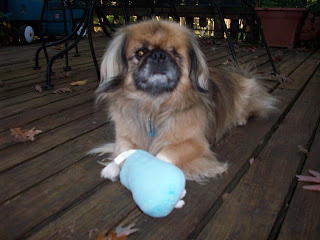 Odin loves toys, being on the deck, running to the fence to greet our canine neighbors. He also LOVES cats. I mean he loves to chase cats. I don't think he'd hurt them, but oh, does he love to chase them. I don't have any, but I've seen him in action a few times. 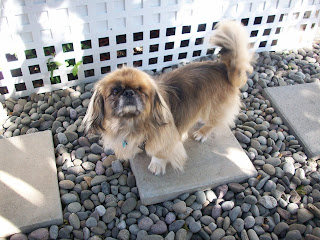 We went to Paige and Dani's house. I took Pearl and Jules to her for fostering. So, we made it an fun trip and had lunch and met some other Pekes there. Odin went along to meet a possible adopter (she adopted sweet Drew instead). 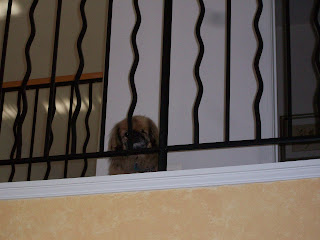 While there, Odin saw a cat and followed it upstairs. I heard some barking and thought, "That sounds like Odin!" It was. I looked up and there he was. 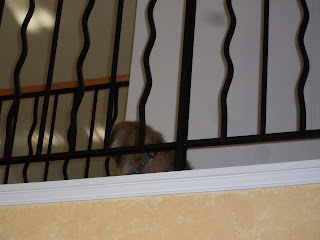 I called him, but he turned around and then looked back at me. CAUGHT! :-) 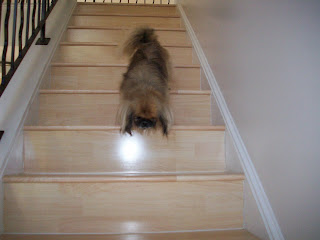 He came, relunctantly, down the stairs. There was no carpet on those stairs, though, so he took his time. He sees fine with his one eye, but these steps were a little more than he was used to. 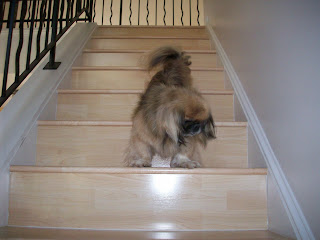 "Am I almost to the bottom?" Will that teach him not to chase cats upstairs? Probably not. 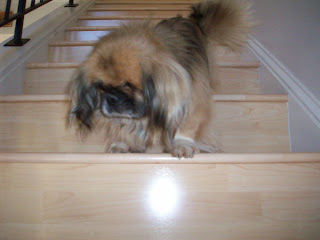 Good, almost there. Enough adventures for one day!
Posted by Linda at 1:00 AM

Oh he is one sweetie - even if he likes to chase cats!!!