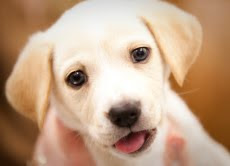 This five week old puppy (not 5 months old as the article says) was found near interstate 81 in Virginia. He was behind a building and whimpering from the cold. The man who stopped put him in his car and decided to find a home for this abandoned puppy. A friend, Kristen, said she would take him. Being a college student, and working multiple job didn't allow much money though. She took Buddy to Dr. Lucinda Hodges, our Roanoke rep and vet-- Harris Animal Hospital. Buddy had his shots and exam. A day later, though, Buddy (who only weighed four pounds) was sick and so he was taken back to the vet. After an xray, Dr. Hodges saw that he had a twisted bowel and needed immediate surgery. Kristen had no money for this, but Dr. Hodges said they would work with her to save Buddy. Kristen posted Buddy's plight and was able to raise the money for Buddy's surgery-- which was already being done because waiting was not an option for this little one. http://www.roanoke.com/news/roanoke/wb/303579 (This is the article in the newspaper.) Buddy is now doing fine and has recovered from his surgery. We are so proud of our Roanoke vet, Dr. Hodges and the tremendous compassion she has for these animals, even when owners can't come up with the payment. Thank you, Dr. Hodges!! We are so glad you are part of our group.

Another note: Little Cindy who passed away shortly after rescue will have her ashes spread on Dr. Hodges farm, where the rest of her deceased dogs have also gone. Dr. Hodges knew in her head that it didn't matter once Cindy had died, but in her heart she knew she wanted Cindy to have a final resting place with the rest of her "babies." I'm so honored that she is my friend. What a heart she and her husband have.
Posted by Linda at 7:50 AM

There are some wonderful people out there!

I’m Mike…Buddy’s step-grandpa (Kristen’s mom’s hubby). Buddy is doing very, very well in his new home. He has a brother, Conner, our 3 y/o Golden Retriever, who is absolutely crazy about his little bro. These two have a ball playing and romping and Buddy acts like he is Conner’s equal, even if he is now only about 20% of Conner’s size. I think it’s safe to say that he is one very lucky little dog to have found his way to Kristen and Dr. Hodges.