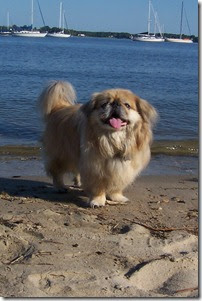 Yo-Yo and Bear-Bear belong to Stephanie. Yo-Yo was adopted when he was about 7 years old, which would make him 15 years old now. His mom is hoping that is wrong and that he's younger. 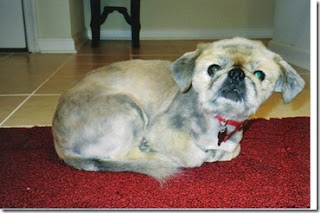 This is Yo-Yo when she first got him. He had been shaved down and you can tell he needed a lot of love and care-- he got it with Stephanie. He was a sad dog before he was adopted, but he and Stephanie bonded in a very special way.

Bear-Bear is her one-eyed Peke-- this is so common with Pekes. I have a few here. (They have no nose to protect their eyes after all.) Bear-Bear has disc problems and was on the continuous cycle of steroids and strict rest. His mom took him to a different vet who performs laser therapy and Bear-Bear is doing so much better.

In the spring time Yo-Yo had some scary seizures (I have three here with seizure disorder and it can be daunting at first) and after running all kinds of tests, it showed he may have Cushings disease. He is doing better now, but at approx age 15, he is having some weakness in his hind legs. But, no seizures and no sign of pain. He’s still a very happy boy. 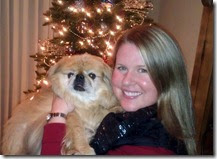 Here she is with Yo-Yo. He has lost most of his hearing, and is showing signs of getting older, but he still has "puppy moments"-- you are familiar with those. I call them aerobic moments here. We hope Yo-Yo and Bear-Bear have much more time with their mom. They are truly loved there.
Posted by Linda at 1:00 AM

I have a big smile on my face!