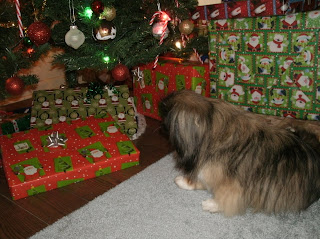 I want to wish you all a Happy New Year-- I pray this will be a wonderful year, full of joy and blessings for each of you. I told you I received a lot of Christmas pics, so I'm going to continue using those until I use all I have. They are too cute not to use! Abigail above, one of Toni's dogs was checking out Christmas presents. 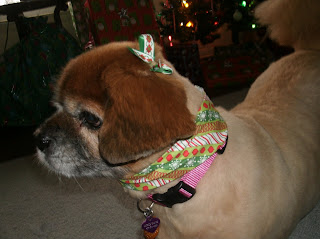 Mitzi was a senior dog she took in when we had a request to take in a Peke mix whose owner died. Toni and I could NOT see the Peke anywhere in this dog. And she is not a small dog! But, she needed help, and Toni has a huge heart for animals, so she took her in. 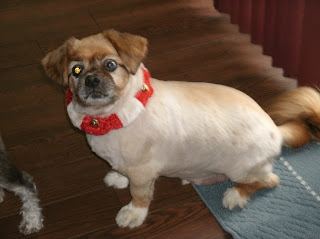 Marco Polo was another "Peke" we took in years ago. He was in terrible shape in a shelter and one of our reps couldn't leave him there. He was adopted but came back into rescue and has lived his life at Toni's, being loved like he never was before. 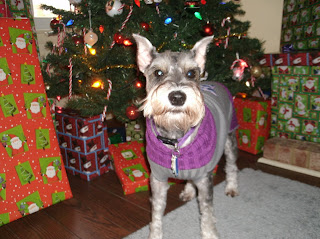 This is Crazy Cooper. Toni was in a pet store and one of the workers asked if she'd like a miniature Schnauzer that had some health problems. She had no idea why they picked her out, but she took him. He isn't miniature and he didn't really have health problems. But, he loves to play and he loves her great-granddaughter. 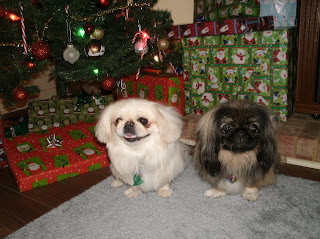 Then there is Abigail and Daisy. Abigail came to rescue via Toni's and that was the end of that. :-) She never hit "rescue" because Toni saw her first and decided this tiny little girl was there to stay. When Daisy needed help, Toni said she would foster her. Another foster failure. :-) Aren't they cute together!! 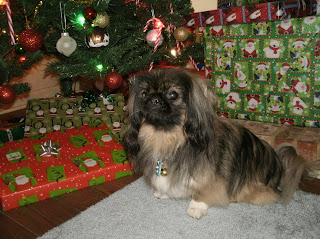 Daisy posed on her own also-- she wanted to guard the tree in case there were presents for her. I'm sure there were! 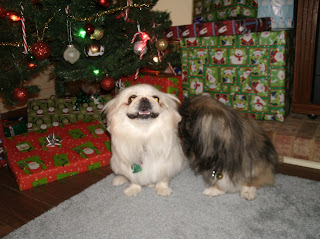 Abigail joined her and Daisy shares a secret. 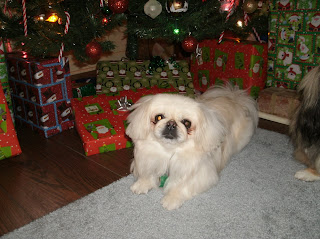 What did you received from Santa? I know it was wonderful!
Posted by Linda at 1:00 AM

Moi Moi and Coco can see Peke in Mitzi!!! Don't ask me where - they won't tell me! LOL

I nearly called Coco "Mitzi" after the famous Guerlain perfume called Mitsouko but she got Coco after a Chanel perfume in the end!