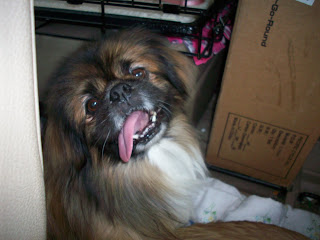 I told you that we went to the farm several weeks ago. All the dogs piled into the car. Scooter was ready for an adventure! 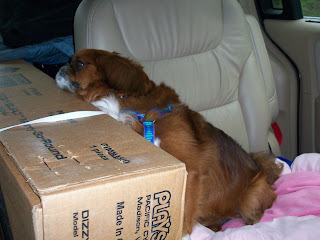 Kai Kai was sound asleep on the box -- I put this picture in before. This dog can sleep in the oddest positions! We were taking up a big "dizzy swing" for the grandkids. Good thing we have a mini-van! 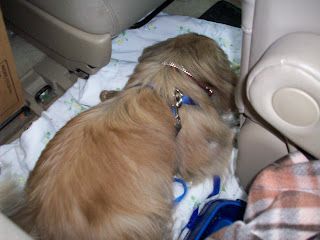 Max was curled up on a blanket on the floor-- Starlight and Cranberry were in the van also, but they declined having their picture taken. 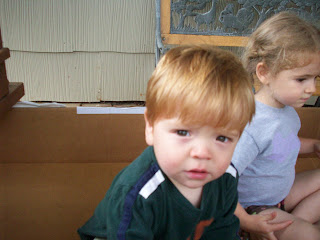 Three of the "Bits" live at the farm. Drill Bit (with Bitty Bit in the background) is a boy-- all boy. 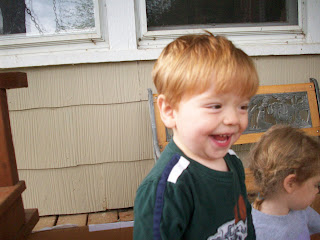 Now could he get into any trouble-- Jeanne, I'm asking you. :-) Jeanne adores my grandson! 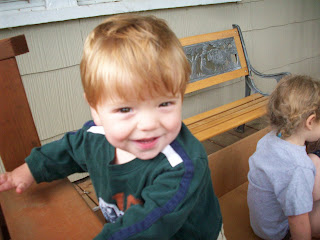 Look at that sweet face-- he couldn't do anything wrong. Right?
NOT! 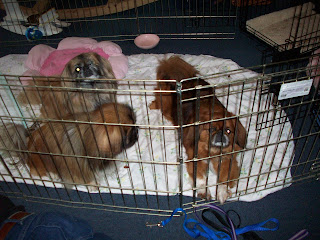 When I go to the farm, I take an xpen for the dogs. They are very comfortable, with blankets, toys, beds, water. They aren't suffering at all. 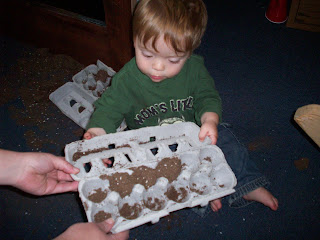 And they were clean when we went there. But, Drill Bit came into the room. He spotted his mom's seed trays. Oh, no. Can you see it coming? 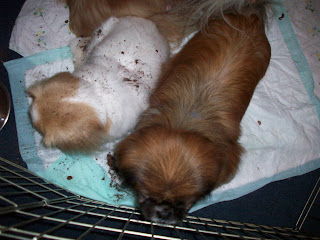 He threw one of those seed trays and all the dirt into the xpen. Why, I have no idea. I had two sisters, I had two daughters-- what are boys? How do they think? 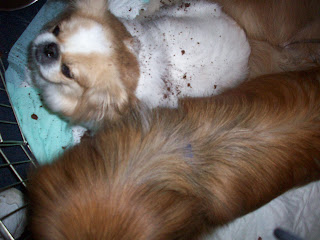 Starlight got the worst of it. Did it bother her? No. 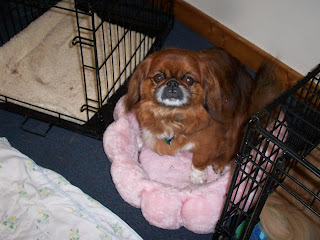 I think Kai was out of range, comfortable on the pink bed. Can we go home now, Mom? :-) When we got home, everyone had another bath! Oh, while I was cleaning up the dirt, Drill Bit went into the bathroom and emptied the dog water bowl in there-- on to the floor. He's faster than I can keep up with!
Posted by Linda at 5:00 AM

I had a daughter only and just one sister so I am with you Linda - boys are naughty and why do they do those things I shall Never know!! LOL
My grandson Carlos and my dog Kenzo are like bad boy brothers - both "baaaad to the bone"! LOL

Linda, I'm glad you made it to the farm and got to bring the grandkids the swing. I hope they loved it! I think Colby has the same personality as Drill Bit. Naughty... but then looks at you and smiles. Colby is so rotten and then he comes and cuddles. Hard to be mad at him! Thanks for sharing.

LOL, that is too funny! The Pekes appeared to be good sports about it though:)