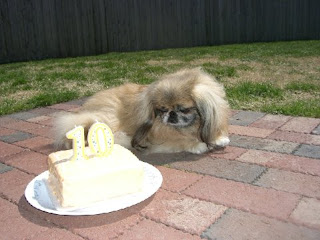 This is Tess. She was adopted from us and now lives with Pekes and Dobermans. It's quite a combination, but their owner are diligent about keeping them all safe. Those Pekes can be dangerous! haha Tess now has a new sister. (She's refusing birthday cake in the picture-- can you imagine!) 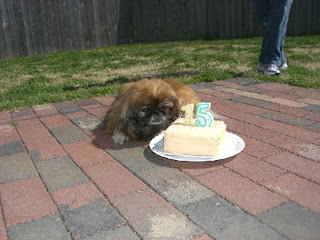 This is Vicky-- she's not the new sister. She was there already. The new sister is Heidi. Heidi was dumped out by the side of a highway and someone saw it happen. She stopped and picked up the dog. They tried to care for her, but knew she had problems they weren't equipped to take care of so they took her to the vet. And the vet called Tess and Vicky's owners, who he knew could help this little girl overcome whatever had happened to her. Heidi was so terrified that she wouldn't come out from under the bed. She had never had a dental (or any care!), and so she had a dental and lost 17 teeth. That meant she could eat without being sick. She was cleaned up and her LONG nails were cut. She had a urinary infection and soon she'll be spayed-- one thing at a time as she is healthy enough. 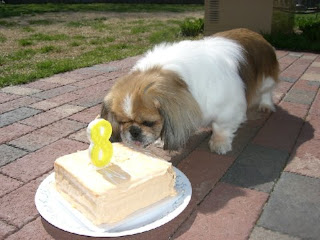 Heidi joined the family on Tess' eighth birthday , so they decided to give the same birthday to Heidi. Vicky was 15 on April 2, so they all had cake. Some enjoyed it and some refused it-- like Tess who wants to keep her girly figure. :-) Their owners said, "Heidi refused dog food of any flavor or variety but loved cake. True girl. Vicky sniffed it, licked it and walked away; we think cause it wasn't chocolate. :)" These Pekes-- you just never know!
Posted by Linda at 5:00 AM

Aw, aren't they the cutest? Thanks to the man who saw the sub-human dump Heidi on the side of the road, rescued her and saved her little life! Wonderful that she has a nice loving family now and is getting her medical care. Go, Heidi!

Heidi is a very pretty girl! I am glad that she found such a great furever home:)