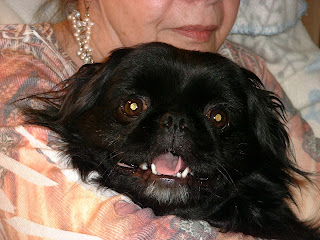 Marco came into rescue a few years ago-- but to look at this picture, you wouldn't believe the difference. 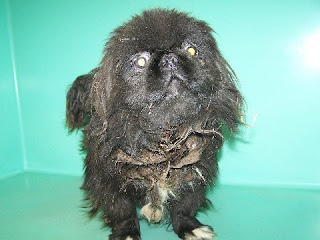 He was matted and filthy and his collar was embedded in his neck. Now Marco Polo is sunshine and fireworks in a black fur coat. His smile lights up the entire house. He has matured into a gorgeous young male. The dramatic difference between Marco now and Marco then is staggering. 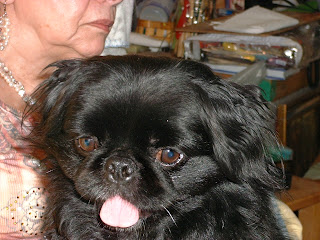 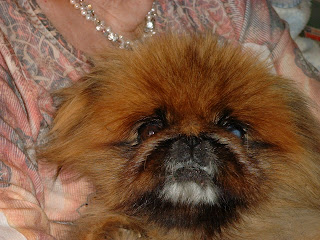 He now lives with Charlie, a Peke they got from Louise Harden (our group's founder). Charlie is older now-- he will be 12 in December. 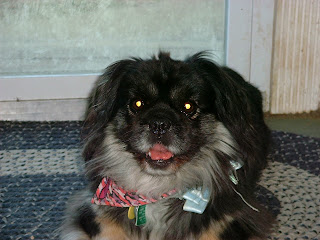 Last to join the family was Zsa Zsa. She was listed as a Peke, but if more of a Tibetan Spaniel. She was adopted last year and is a gem. (The Tibetans and Pekes share a genetic heritage, as Buddhist monks in Tibet and Buddhist monks in China exchanged puppies as gifts -- this was before the Peke became the sole province of the imperial family.)
She is very femine and takes her treats very gently.

This is one happy dog family and I'm so glad they have these special dogs to enrich their lives. It makes our "job" as foster parents worth everything we do!
++++
I just received this note from Marco's new family: "As you know, 12/1 is the second anniversary of Marco Polo joining our family. and it's been such a wonderful 2 years. I made his annual check-up appointment today, and the assistant at our vet's office said, "Oh, I work that day [the day of the appointment]. That's wonderful. I love Pekes, they are always so happy!"Now, when we look at the "before" shot of Marco Polo, that was not a happy boy. How could he be? But he had the seeds of happiness in him. I recall about 12 years ago or so, I found a Peke website, and I think it was from Australia. It read, "The most important thing in a Peke's life is showing his humans how much he loves them. The second most important thing in a Peke's life is showing his fellow Pekes how much he loves them, too." And that's what was missing from Marco Polo's life: humans and another Peke to love. In the mix, he got an Ocicat, our Milo, a total foundling who adopted US, and then this March 13, he got a Tibbie sister, Zsa Zsa. While Charlie and Marco Polo play 'bark at me" and "rolling on their backs and flailing their paws at each other" games, and "let's see who can kill the toys the fastest", Marco Polo and Zsa Zsa love to race in big circles around their yard, and do their imitation of World Wrestling Federation. The play bowing is SO dramatic, and they both have huge plume tails that wag like prayer flags in the Himalayan winds, and then ka-POW! Sometimes it sounds like two elephants are wrestling down the hall." I love it!
Posted by Linda at 1:00 AM

What a lovely Pekey family and that before and after!!!!

Even Oprah's shows "before and after" programmes didn't do that sort of dramatic change !!! WoW !!

they are all so precious and adorable...you can tell they're well taken care of. What a difference in Marco's coat - it's so nice and shiny looking...I have a soft spot for the old timers ;-) Thank you and bless you for caring about these wonderful animals!