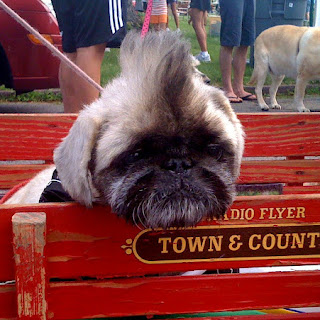 Mary emailed me to say she was having to let go of her sweet Ezee.    He was almost 16 years old.

He could no longer do anything for himself and his mom knew it would be selfish for her to keep his very broken external body going, to keep him so dragged that he was not really there.     He had been through so much, that she wanted him to be out of pain and no longer suffering.    He could no longer even sit up on his own.    He would cry if he wasn't being held-- as owners, we know this is the hardest part of loving a pet-- having to let them go. 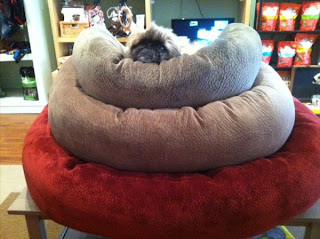 Ezee was Mary's boy for over 14 years and was her best buddy and almost constant companion.  Her longtime trio of Poochie, Boots & Ezee will be reunited and running around Rainbow Bridge.  We are so sorry-- rest in peace, Ezee.
Posted by Linda at 2:44 PM

So sorry to read this- we send our love from Australia.

Thank you Linda for sharing Ezee's story. He was--as one of his vets put it--a once in a lifetime dog.
Mary

He certainly had a good run and love from you Mary and you did all you could for him above and beyond the call of duty. Now you have given him the best yet by letting him go. He is at the Rainbow bridge now waiting for you! XOXO Pekemamma