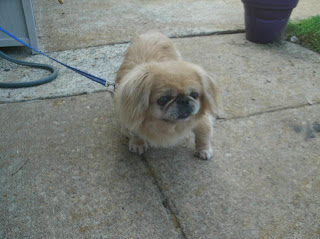 We rescued Tony from a shelter in early September.  If you remember, he was turned in when his owner was told he could no longer keep him at his assisted living facility.     But, he could, and we were able to reunite them.   We kept our name with the assisted living manager so that we could be called in emergency. 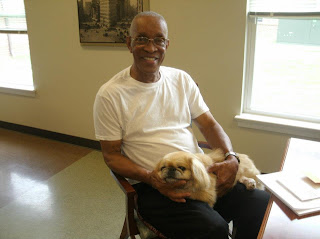 Tony began having seizures over the week-end.   His owner called us for help after using all his resources to help him.    We got Tony to the vet where he began to seize and go into cardiac arrest.    He came out of it, but was not doing well and he was in great pain.    It appeared he had some brain damage from the seizures over the week-end and it was time to let him go.    His owner was so upset and Toni, his foster mom in rescue, who was there, was very distressed, too.    I was able to hold Tony in the back while he crossed the Rainbow Bridge.   I petted him, kissed him, and told him how much his daddy loved him.  (The owner didn't feel he could hold him, so he said I could.) The vet made a paw print and cut a lock of hair for his owner-- and then his owner asked to take him home to bury  him.    Rescue can be hard, letting them go after bringing them so far is hard.    His owner will miss him so much, but I'm so glad PVPC was able to give him a little more time with his precious boy.   Rest now, Tony.   We love you.
Posted by Linda at 2:47 PM

I'm so very sorry to hear that. RIP little Tony!

Like Doris , I am just so sad to hear this.

So glad Tony was able to be reunited with his owner/dad for his last several weeks of life, thanks to PVPC and Toni, his foster mom. My heart goes out to Tony's owner/dad, and I am so sorry for his loss. I wonder if the assisted living facility would allow him to get another furry companion? RIP Tony! You had a great life with your owner/dad.