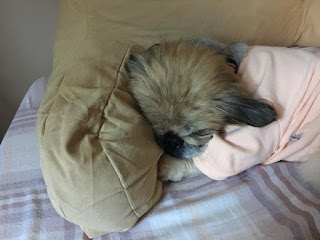 Sir Gizzie came to us in May as a very sick Peke.  His foster mom wrote his farewell, since she wanted to be the one to do it. 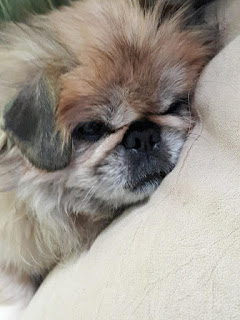 "Gizmo – now Sir Gizzie – came to us in May from a Baltimore shelter. Ida did the ‘jail break’ for Gizzie and them met his new foster mom and made the exchange. 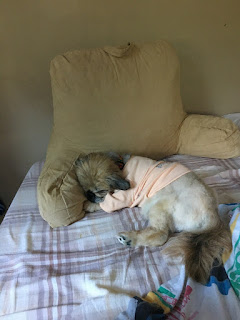 Gizzie had been treated for fleas at the shelter but he was in bad shape. 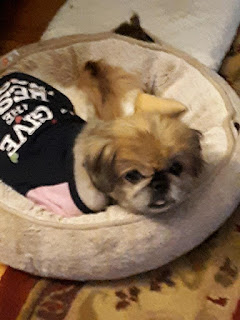 His coat was overgrown and matted, his eyes were dry and matted, his mouth was a disaster, he had not been neutered, he was under weight, he had an awful wracking cough and he was so very weak. 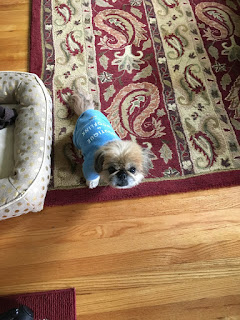 His foster moms gave him food and water via a syringe for many days trying to get him strong enough for a dental. 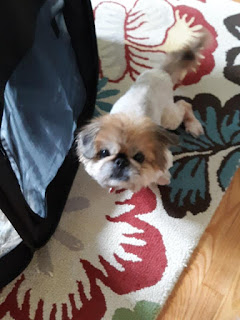 It was finally decided to take the risk of having the dental done. 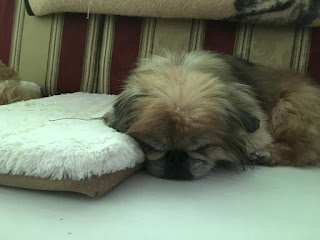 The vet was extra diligent monitoring him and he came through. 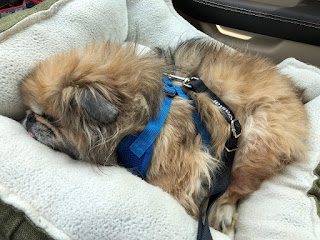 He began to eat small amounts of soft food the next day and, after adding puppy food to his diet, he began to gain some ounces. 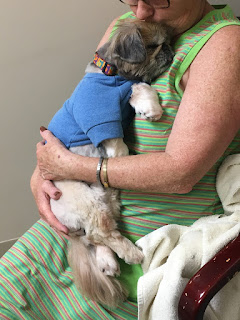 The cough that he had was a respiratory virus which was not Bordetella. After many, many different anti-biotics, the cough began to disappear. 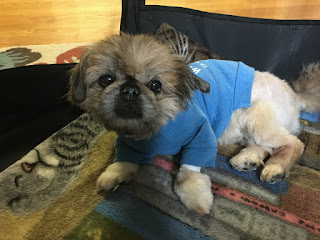 As his physical health improved, bits of his personality began to come out. 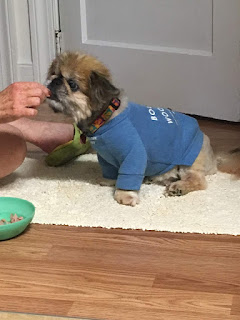 He could be very lovable and sweet while he also began to show a vicious, aggressive side. 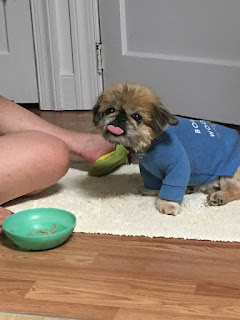 Despite a combination of anti-anxiety and pain meds, the aggressive behavior became more frequent and more severe. 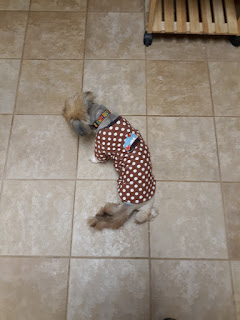 The risks to the foster moms and the other pets were increasing significantly. After much discussion with the vet, it was decided that those risks were too many and great. 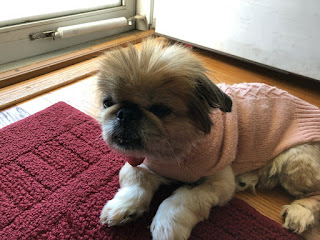 Despite all that you do for a rescued dog to heal them physically, it is not always possible to heal their emotional spirit. They have scars that are too many and too deep."

Sherry wrote Sir Gizzie's farewell.  It was hard to do.  She spent many visits and calls with the vet trying to help Sir Gizzie, but his mood swings were not safe.   It was the advice of the vet to gently let him go.   We rely so much on our vets because when these decisions are made, it is so hard and so emotional.  We have so much of our foster heart involved and wish we could just fix them.  It's not always possible.  So, with great sadness, she let him go-- free of pain, free of confusion, and free to run and play.  Farewell, little one.  We are so sorry.
Posted by Linda at 3:36 PM

Sweet Sir Gizzie, so much was wrong and while some of it could be fixed, there were still awful scars that could not be healed.

Run free little Sir, run free of pain, mental scars and a world of confusion that wouldn't go away.

Dear Sir Gizzie .... you are now in a safer place and boy, everyone did a wonderful job to get him back to a little health but he must have been so ill for a long time.

All that could be done, was done. Thank you. Ron and play mr Gizzie, you are free at last.

The loss of Sir Gizzie is heartbreaking. His foster mom & the other people directly involved in his rescue & care is amazing. Thanks for not giving up on him and doing everything you could for him. Rest in Peace Little One.

Sir Gizzie was so lucky to have someone care for him & give him such support. Sometimes the physical scars are too thick to allow the sweetness to come out. He was blessed to have such compassionate care givers. Fair winds & following seas to the little Baltimore pup. May you find joy in your new existence.

God Bless you little one "Sir Gizzie". Run free and play when you cross over the rainbow bridge. You have no more pain now. Rest easy little one and know you were very much loved now and forever.

So sorry for what happened to you Sir Gizzie. Rest in Peace❤️I think you were in pain n that’s the only way u could react. I’ve been there. Bless your life in the Spirit World ❤️❤️❤️