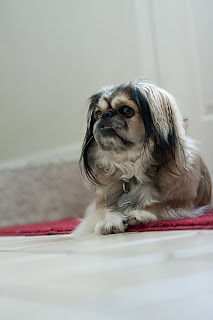 JoJo was adopted from me. He was a foster dog in my home and I just loved this guy. He was found at a gas station in a crate. He was there for hours before someone called animal control. 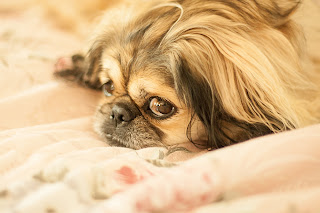 JoJo has a new sister now and he has been undecided about her-- he thought he was fine as the only dog. But, he is doing so much better now that she is there. I think most dogs do better with another dog to keep them company. JoJo has gotten so sweet! He loves his nap time with his mom and snuggles up next to her with all four feet in the air, but he doesn't sleep as much as he used to. 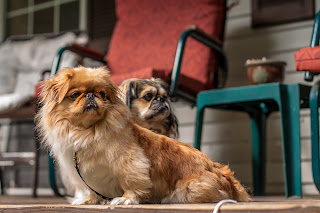 Annabelle was adopted from us and JoJo challenged her at first, but she gave it right back to him. All eight pounds of her! 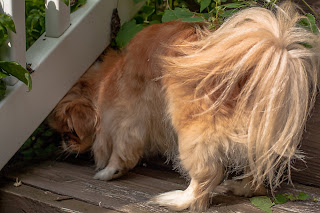 Annabelle is VERY interested in the blue tailed lizards that hand around her house. She will run after them quickly and JoJo will run after her as if to say, "What are we chasing?" She watches closely because those lizards will sneak right by you if you aren't careful. 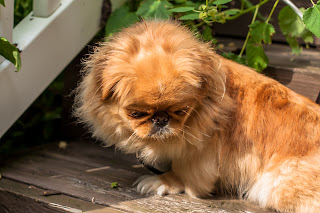 She is just going to sit and wait-- she knows they'll come soon. 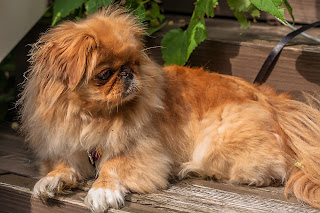 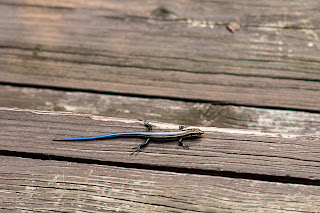 Yes, there it is! (I have these at my house, too. They are all over this summer!) 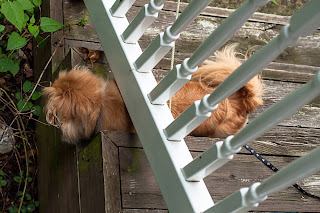 I know it went into the bushes. Let me get a closer look. 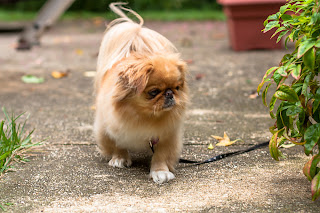 Annabelle has done wonderful things for JoJo and his personality. 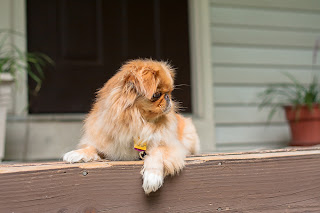 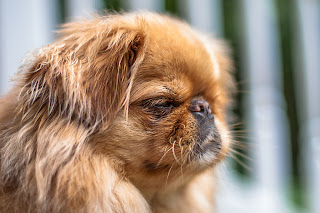 He knows Annabelle is full of life and alert and he is staying alert to find out if she sees anything interesting. (Okay, in this picture, she just might be taking a little snooze.) Their mom and dad are so glad they got a friend for him because his is a different and happier dog now. 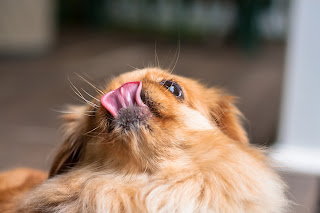 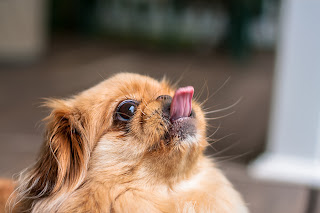 She has been a happy addition to the family! I'm so glad JoJo has a best friend now! (Her dad wrote me and said, "She'll scratch on the door where the dog food is when she is hungry, then turn around and look at you. If that doesn't work, she goes over to the trash basket and scratches on that. Doesn't work? She goes over to the stove and scratches. She is one smart pup and thinks we are dumb as clams and don't know what she is trying to say. One time, she even let me know the water dish was
empty by scratching it when I walked by." She is smart!)
Posted by Linda at 1:00 AM

Moi Moi feels JoJo's pain ... you have to keep up when there is a "addition" - Mmmmmm.

Moi Moi has a Rolex watch and that little thing must have an alarm for she will ramp it up at "food time" and then she ramps it up at "walk time" ..... I wonder if your peke's have this special Rolex Pekingese Watch too????? LOL !

Love the photos and your captions! Glad Annabelle is helping her brother JoJo "learn the ropes" of being a Peke. IMHO, Pekes are very smart dogs. Ginkgo has me trained as to what she wants. Love this story!