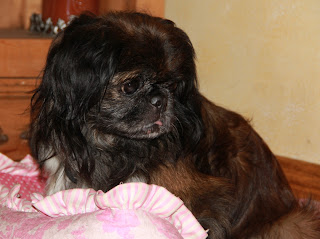 Puji came into rescue last month-- and what a change in appearance he has made-- he looks so good now! 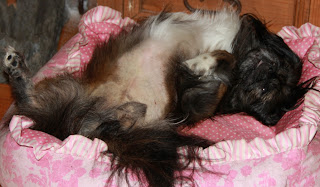 He has liver issues and hasn't done well, but he is staying with the vet (and goes home with them at night) so he is getting the most incredible care. He has to be syringe fed and he still wags his tail when you talk to him, even though he is in guarded condition. He sleeps on his back with his legs curled up, a contented boy, even though he is still pretty sick. 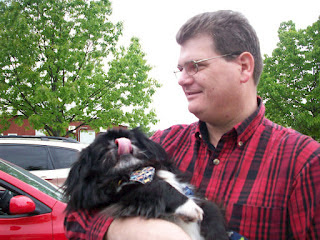 Roger, the vet's husband (and clinic manager) has a wonderful gift and love for animals and he will do all he can to save them. Last night, Puji ate some filet mignon on his own. Roger had grilled some for a birthday party and gave some to Puji just to see if he would eat something on his own. Puji loved it! So, this morning, Roger grilled him some more. :-) The neighbors were probably wondering why they were waking up to the smell of grilling meat. Roger said he's probably crazy, but I think he's pretty great. He's pictured above with Bear, but I know Puji gets the same hugs. Thank you, Roger and Lucinda for all you do!

Living the high life there !!! LOL

Roger and Lucinda = angels. Thank you both for caring for the animals who are having troubles.