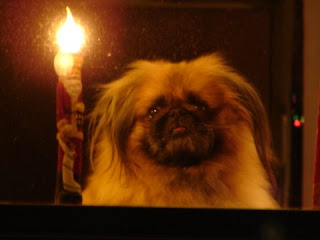 Lafite was 12 years old and had been diagnosed with cancer. We had several special dogs in our rescue family who were diagnosed around the same time. I love this picture of Lafite, taken at Christmastime. I think he was looking for Santa. 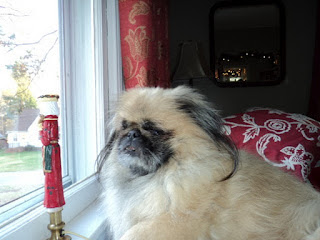 He was a beautiful dog and Chris and Steve loved him so much. Chris told me that Lafite had picked her when he was a puppy. He had put his little paw on her foot as if to say, "I want you to be my mom." Tonight, he gave her his paw again, but this time it was to say good-bye. 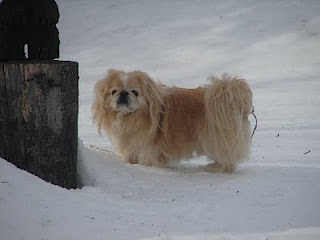 Lafite's brother died in March, 2010, and I know Bogey missed him. Then, Lacy came into his life and then Mr. Winks came to live with them. Lafite got to be the patriarch of his Peke family. 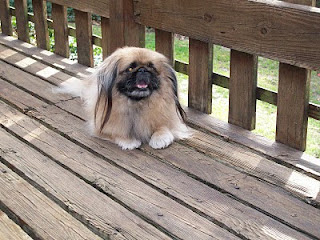 Here he is when he came to my house. Look at his long ear fringes and happy face. 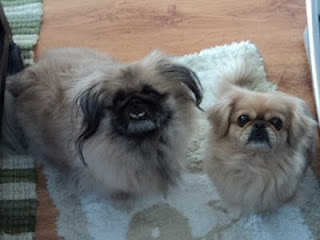 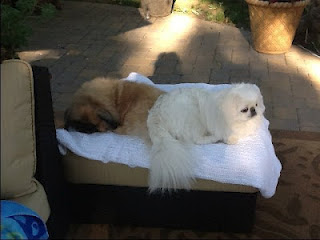 Mr.Winks kept an eye out for everything-- and Lafite took a nap. 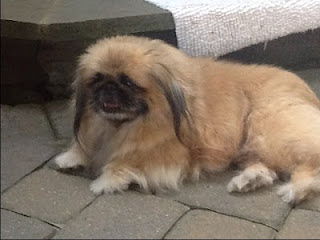 We know his battle was hard, but he finally told his mom and dad it was time to go. Now he can run and play again, and I know Bogey met him so they could play together. We will all miss you, sweet boy. Rest in peace now.
Posted by Linda at 8:49 PM

These farewell posts always bring tears to my eyes. What a precious Peke Lafite was. I know he gave such love to his family. Cancer is an ugly beast to human and furry. Rest in peace Lafite, I know you will be missed.

I'm with you, Tracey.

So sad to lose this special boy.

Very sorry for your loss. Wonderful pictures of a sweet and adorable furry man! A great love story. Lafite you will be remembered always. Glad you are not suffering, little one.

I am very sorry to hear about Lafite - what a beautiful boy he was.