LEO THE PEKE AND RAISINS 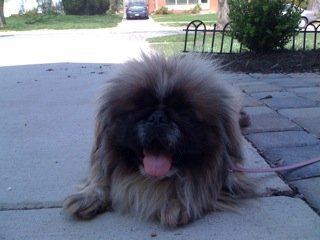 Leo, the blind puppy we got in 2010, now lives in New England.    His name is now Choku and he's a wonderful, loved boy.     He got into some raisins the other day-- quite a few raisins!    His mom rushed him to the emergency vet who began treatment for raisin toxicity.    Raisins can be extremely dangerous for dogs to eat and small dogs like Pekes are especially prone to serious problems.    His mom, Jane, said that a dog can go into acute kidney failure at any  point in the 2-3 days after eating raisins and sometimes a little longer.   Even a few raisins can do this.     The vet made him drink a charcoal mixture to make him throw up and then flushed out the kidneys and monitored the kidney function.    He was in the vet a few days and it cost quite a bit.   She said the moral of the story is not to leave any raisins where a dog can get them.    I've passed this on to my daughter, whose son, Beach Bit, is now into those little boxes of raisins.   He won't get them here since he likes to "share his treats" and I don't want any problems.    Thanks for sharing this, Jane!
Posted by Linda at 5:24 PM

I think all dry fruit is dangerous ???